Colostrum is a milk-like substance that comes from the breasts of mammals for the first few days following birth.

It is sometimes referred to as first milk, as it comes before true milk appears and is high in fat for energy, proteins, carbohydrates, vitamins and minerals. However, it is the protein molecules that hold a special function. Some of these proteins are antibodies that fight disease-causing agents such as bacteria and viruses, which a newborn is exposed to as soon as it enters the environment outside of its mother. These provide the newborn with passive immunity; basically kick-starting the immune system development.

Antibody levels in colostrum can be 100 times higher than levels in regular milk. Anti-microbial factors are also contained within colostrum, adding to the protective nature of this substance. Another important component of colostrum is the range of growth factors; these stimulate the development of the gut. Colostrum also contains proline rich peptides (PRPs) which are other special protein molecules. PRPs are the ‘messenger’ molecules that modulate the immune system, acting like a kind of volume switch, turning up when needed and turning down when things are quieter.

Colostrum antibodies were used to treat illness and infection prior to the development of modern day antibiotics. In fact, the first oral vaccine for polio was developed from antibodies found in bovine colostrum. Today, interest and research into the anti-pathogenic properties of colostrum is ramping up, due to the increase in antibiotic-resistant strains of pathogens. These can lead to serious and sometimes fatal infections.
Cows produce far more colostrum than their calves require, so the excess is harvested and used in research as well as being sold for human consumption.

Globally, cardiovascular disease (CVD), often thought to be a male problem, is the number one killer of women. Nearly two-thirds of the deaths from heart attacks in women, occur in those that have no history of chest pain.
Atherosclerosis often leads to cardiovascular disease. It is now known, that an altered immune system drives the dynamic accumulation of oxidised cholesterol, that is, atherosclerosis.
Research has shown that heart disease can involve immune sensitisation to cardiac antigens, ie. the immune system may play a part in heart disease. The PRPs found in colostrum may have a role in reversing heart disease, very much like it does with allergies and autoimmune diseases. Additionally, colostrum has been shown to lower LDL-cholesterol while increasing HDL-cholesterol concentrations, which may reduce the risk of cardiovascular disease. 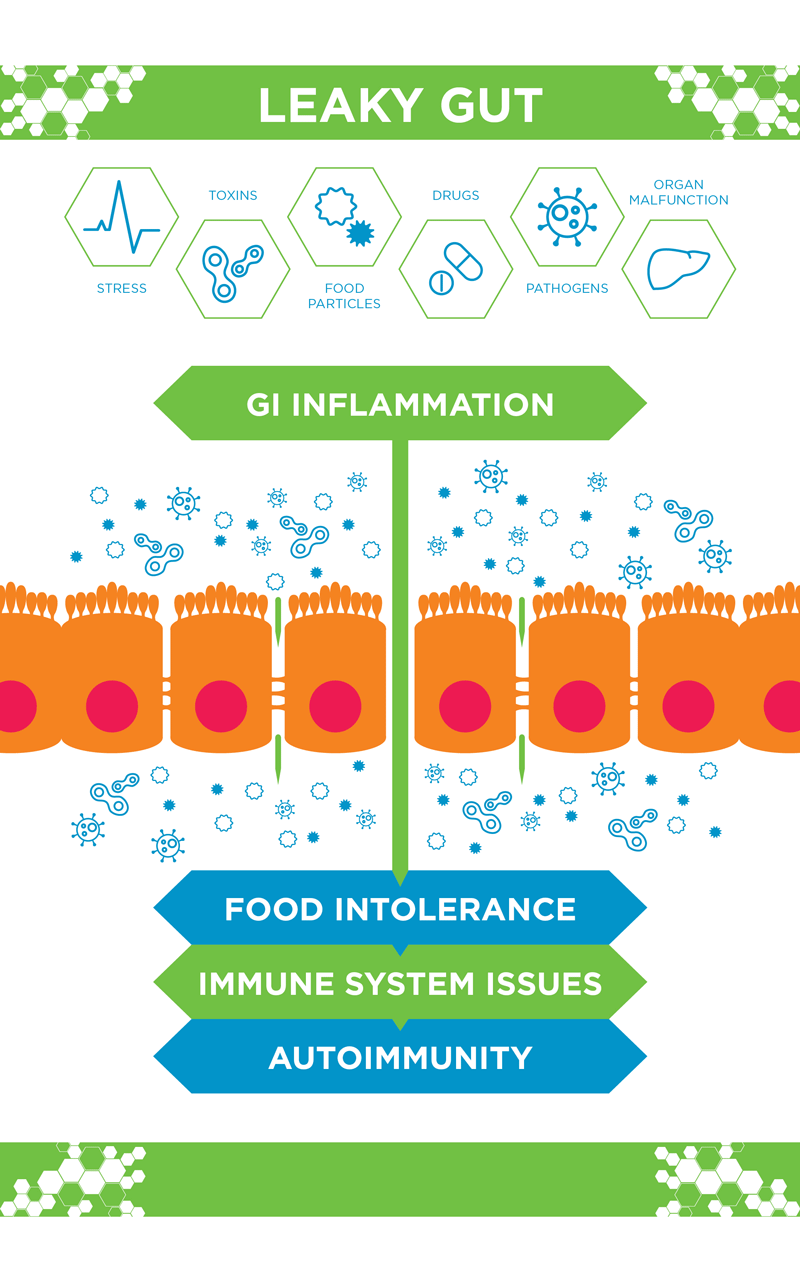 Changes in the mucosal layer of the gut often results in intestinal barrier dysfunction (commonly known as leaky gut) which can then lead to a compromised immune system. Intestinal barrier dysfunction occurs when the tight junctions that keep the mucosal cells packed together are destroyed.
This then allows undigested food particles and common antigens to pass directly into the blood stream, alerting the immune system to respond to what it thinks are “foreign bodies”.
So what causes this damage to occur in the first place? Ingestion of known allergens, such as dairy, by someone with a known lactose allergy, or gluten ingested by a celiac will undoubtedly do damage to the gut lining. Other common factors that damage the gut include antibiotics, drugs, (both prescribed and non-prescribed), physical stress, infections and some neurotransmitters and cytokines (released as a result of mental & emotional stress).
In order to help the gut to heal, removing or at least minimising the stressors is the first step. The next step is to aid the body in the repair of the mucosal cell layer. A healthy and nutritious diet along with added colostrum, aloe vera and the amino acid glutamine may be of benefit. Improving the gut lining will lead to an improvement in digestion, the absorption of nutrients, improved immunity and overall better health.

Why would I choose to take colostrum?

There is a lot of research supporting colostrum for improved health. Below are some of the key benefits of colostrum:

As always, if you are on any medications or suffer from chronic health conditions, speak with a health care professional before consuming any dietary or nutritional supplements.