Inside your immune system. How it works!

The world’s attention has turned to the immune system, the body’s defence force against disease-causing bacteria, viruses and other organisms that we touch, ingest and inhale every day.

Our immune system is essential for our survival. Without an immune system, our bodies would be open to attack from bacteria, viruses, parasites, and more. It is our immune system that keeps us healthy as we drift through a sea of pathogens.

Everyone’s immune system is different, but generally, it becomes stronger during adulthood as, by this time, we have been exposed to more pathogens and developed more immunity. Once an antibody has been produced, a copy remains in the body so that if the same antigen appears again, it can be dealt with more quickly. That is why with some diseases, such as chickenpox, you only get it once as the body has a chickenpox antibody stored, ready and waiting to destroy it next time it arrives. This is called immunity. There are two main parts of the immune system:

These two immune systems work together.

The innate immune system is the first line of defence. It patrols your body and is the first to respond when it finds an invader such as pathogens and is particularly important in warding off bacterial and viral infections.

The innate immune system is inherited and is active from the moment you’re born. When your system recognises an invader, it goes into action immediately. The cells of this immune system surround and engulf the invader. The invader is killed inside the immune system cells. These cells are called phagocytes.

The immune system keeps a record of every microbe it has ever defeated. This means it can recognise and destroy the microbe quickly if it enters the body again, before it can multiply and make you feel unwell.

Some infections, like the flu and the common cold, have to be fought many times because so many different viruses or strains of the same type of virus can cause these illnesses. Catching a cold or flu from one virus does not give you immunity against the others.

The cells of both parts of the immune system are made in various organs of the body, including:

Bone marrow: Bone marrow is the spongy tissue found inside your bones. It the white blood cells we use to fight infection.

The lymphatic system is made up of:

Spleen: The spleen is a blood-filtering organ that removes microbes and destroys old or damaged red blood cells. It also makes disease-fighting components of the immune system (including antibodies and lymphocytes).

White Blood Cells: White blood cells are the key players in your immune system. They are made in your bone marrow and are part of the lymphatic system. White blood cells move through blood and tissue throughout your body, looking for foreign invaders (microbes) such as bacteria, viruses and parasites. When they find them, they launch an immune attack.

Antibodies: Antibodies help the body to fight microbes or the toxins (poisons). They do this by recognising substances called antigens on the surface of the microbe, or in the chemicals they produce, which mark the microbe or toxin as being foreign. The antibodies then mark these antigens for destruction. There are many cells, proteins and chemicals involved in this attack.

How to help your immune system

A healthy lifestyle helps one’s immune system to be in the best shape possible to tackle pathogens. Alpha Lipid™ Lifeline™ Colostrum provides vital immune and growth factors and essential vitamins and minerals, its natural antibodies build immunity through gut health. A healthy gut wall means our bodies have a natural defence system giving us the resistance we need to fight off bugs and viral infections helping our bodies perform at their best. 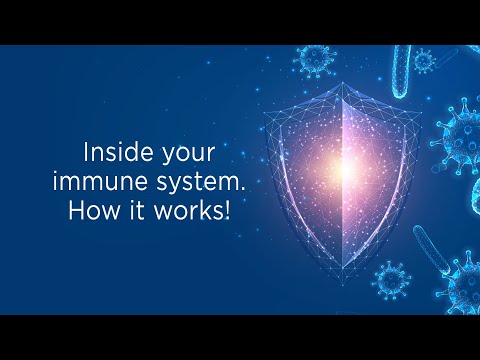 Inside your immune system. How it works!